Create an Account - Increase your productivity, customize your experience, and engage in information you care about.

It is our mission to:

"Proactively protect life, property, and the environment from fire and other emergencies within the community."

This is accomplished through Public Education, Code Enforcement, and Incident Response. 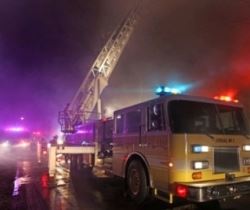 After nearly 40 years of various volunteer organizations serving its residents, the City of Marshalltown organized a full-time career fire department in 1902. Marshalltown Fire Department serves a population of over 27,000 residents from its Central Station located at 107 South First Avenue. The department has signed mutual aid agreements with the 12 volunteer departments in Marshall County.

The fire department is comprised of 27 commissioned personnel and one civilian administrative assistant. The organization’s administrative structure consists of:

Our shift personnel consist of:

Fire crews are divided into three shifts of eight personnel who work a 24 on/48 off schedule beginning daily at 7 a.m.; the department has a daily staffing minimum of six shift personnel on duty. In 2015, Marshalltown Fire Department responded to 2,527 requests for service.

The fire department has a training facility located on the campus of Marshalltown Community College.

Our services include but are not limited to:

All sworn personnel are certified in National Incident Management System (NIMS) and Incident Command, and Firefighter II, Haz-Mat Operations, and EMT or higher.